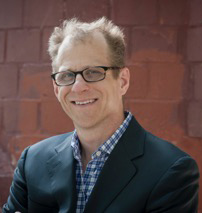 HBA New York would like to congratulate Michael O’Brien as our honored volunteer.

Michael O’Brien helps sales and marketing leaders slay the internal feelings of worry and doubt and reach their full potential.

Before starting his executive coaching firm, Peloton Coaching and Consulting, Michael spent over two decades in the pharmaceutical/biotech industry in roles that ranged from sales to marketing to executive leadership.

He is also lucky to be alive. On 11 July, 2001, Michael was on his bicycle when he was struck head-on by a speeding SUV. He considers it his last bad day and shares his journey from being a human doer to a human being in his best-selling memoir, Shift: Creating Better Tomorrows. Michael donates all the proceeds from the sale of the book to the World Bicycle Relief.

Finally, Michael is an active volunteer and corporate sponsor for the Healthcare Business Women’s Association and an advocate for gender parity. Those who have volunteered alongside Michael say his passion for HBA and mentoring is evident. The New York chapter is thrilled to have him as part of our New Members and Volunteer Engagement team.

We look forward to seeing Michael’s continued success in his contributions to the HBA.